EXAMINATION: Death and Dying during the American Civil War: Drew Faust at the Countway Library of Medicine

Some of us would claim not to be frightened of death, but would admit to concern about the end of life. This anxiety, Drew Faust explains in front of a packed Carl Walter Amphitheater on December 13, 2012, is hardly a new one. The notion of how to manage death with dignity – how to die a good death – may have undergone professionalization in the last few decades, with journals, associations and training programs for palliative care. But its roots go back much further. Victorian notions of how to die a good death, the ars moriendi, characterized by a domestic, peaceful passing in the presence of loved-ones, Faust wants to argue, were profoundly challenged by the American Civil War. 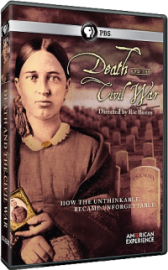 Faust’s speech builds on her book This Republic of Suffering: Death and the American Civil War, which was the basis of a new documentary on death and the Civil War by Ric Burns (brother of Ken Burns; both brothers also produced the earlier popular 1990 documentary on the Civil War). It also marks the opening of a new exhibit in the Center for the History of Medicine at the Countway Library of Medicine, “Battle-Scarred: Caring for the Sick and Wounded of the Civil War.” Curated by Jack Eckert and Dominic Hall, the show explores the experiences of those who were wounded and killed in combat, and those who in turn cared and mourned for them.  Featuring a variety of archival documents as well as artifacts and anatomical specimens from wounded civil war soldiers, the exhibition brings to life Faust’s claim that the Civil War brought unprecedented destruction, injury, and death to the American people.

750,000 Americans died in the Civil War. This body count, Faust explains, is greater than the sum of fatalities in all other wars in which America participated. Americans were apparently quite unprepared for this scale of destruction: there were no ‘dog tags’ to identify the dead and no system of next-of-kin notification to inform their families. Soldiers died far from home without the comfort of being surrounded by their loved ones. Medical care in general, and pain medication in particular, was li

mited in what Faust calls a true “medical Middle Ages.” There was, in short, little comfort for the dying soldiers. The specimens and objects exhibited at the Countway give a sense of the injuries suffered by soldiers. There are bone fragments, which are either perforated by bullets, or have balls still embedded in them. There are a number of photographs of soldiers with amputated limbs. A surgical amputation set – saw and all – makes the proud pose struck by the amputated soldiers in the pictures all the more awe-inspiring.

Faced with this new cruel reality, soldiers, doctors, nurses and other caretakers “conspired” to recreate the experience of a good death, even in the absence of every comfort. Without adequate medical care, however, end of life care during the Civil War often focused on spiritual rather than

physical wounds. Faust conjures up scenes of dying soldiers being surrounded by photographs of their families, while nurses, doctors and fellow patients tried to play the role of family members. When they were mistaken for relatives by the dying soldiers, Faust reveals, they often did not have the heart to correct the error. Witnessing the death of soldiers, informing their families of their ends, and passing on exactly how they had died was understood as an essential part of the role of caregivers in Civil War hospitals and hospices. Walt Whitman himself took to visiting the wounded and the dying in the military hospitals of Washington. He described his experiences in a series of letters written to his mother. Correspondence with family members, Faust shows, often followed similar patterns, assuring those left behind that their hero had died conscious of his fate which he accepted as God’s will, and that he was sure to go to heaven. In the process of providing emotional assistance to the dying, caretakers redefined the “end of life” to mean “the beginning of a new life.”

An important way of providing comfort to the bereaved was to return the belongings of the deceased with their letters, and in some cases the remains of the bodies were returned to their kin. One such case was that of Alfred Richardson Glover whose photograph features prominently in the “The Dead and the Wounded” section of the exhibit. Killed in battle on June 14, 1863, his body was returned home to Massachusetts and buried in Forest Hills Cemetery. Next to his photograph is

Glover’s very own traveling homeopathic pharmaceutical kit, which was sent back to his home, presumably to serve as a keepsake for his wife, Mary Louisa Bodge Glover, until her death from phthisis on September 10, 1864. Her photograph is exhibited alongside her husband’s. The caption informs us that according to Henry A. Willis, historian of the 63rd Regiment, however, she died of grief.

War has been called a “great accelerator of change.”[1] The Civil War was no exception. The experience of a new scale of death and dying did not fail to leave its mark on American society. Like never before, the American nation was called upon to take responsibility for the end of life.  It was during the Civil War that national cemeteries were first established, and the aftermath of the war bore witness to a large-scale reburial program, in which the remains of soldiers were sought out, identified, and either returned to their relatives or buried in one of the national cemeteries. The unprecedented scale of dying incited a debate about what was the best way to dispose of the dead – burial, or cremation. The war also saw the birth of the United States Sanitary Commission, which inspected war hospitals, maintained records of the sick and 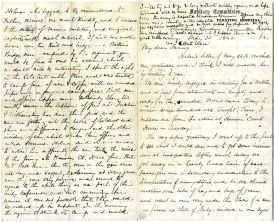 wounded and assisted war veterans in pension claims. The Sanitary Commission’s work comes to life in the Countway exhibition’s richly detailed letters written by Robert Ware, who served as an inspector for the commission between 1861 and 1863.

Amongst the remnants this gloomy subject lies a great opportunity. The experiences of death during the Civil War, Faust believes, remind us of the many dimensions which make up end of life care. We have professionalized and perfected the physical aspects of such provision. We are certainly much better than the Victorians at managing chronic pain and controlling other long-term symptoms. But what of the spiritual anguish that is provoked by death, for the dying, and for their families? Alleviating this kind of suffering, Faust concludes, may be even more challenging for us than for our Civil War counterparts.

The exhibition “Battle-Scarred: Caring for the sick and wounded of the Civil War” can be viewed at the Countway Library of Medicine, 10 Shattuck St., Boston, Mass. 02115

Watch the video of Drew Faust’s speech in full here.

Images of the exhibit are reproduced courtesy of the Harvard Medical Library, the Boston Medical Library and the Warren Anatomical Museum in the Francis A. Countway Library of Medicine.