With the arrival of the New Year, a buffet table of possible resolutions presents itself. Your doctor might advise giving up alcohol or visiting the gym more often. A life-enhancing but less painful commitment would be to read one book from our list below. Each comes highly recommended from leading figures in the medical humanities and associated fields.

I started reading David Foster Wallace’s Infinite Jest out of of a correspondence with D.T. Max, Wallace’s biographer. I read 5 to 10 pages a day, early early morning, watching the light come into the sky, feeling that I was being opened by this masterpiece of writing, this shocking exposure of what can be done with words. I got more cynical by virtue of reading the book—started to suspect things, see under things, figure there was an angle here that I had not yet picked up. At the same time, I got sadder, no, more attuned to the tragic in ordinary days and ordinary lives, mine included. When Max gave a talk on Wallace for my Program at Columbia, I invited students to read with me. I’m rereading it now, slowly, with 8 first-year medical students. They, too, are getting more cynical and more attuned to the tragic. At the end of our session last Wednesday, one student said, “Reading this is making me see more of what goes on every day, but I can’t tell yet what that will cost me.” I assured him that this book will bring him truth.

from Steven Connor, Grace 2 Professor of English at the University of Cambridge

When I was reading everything I could for a book on the voice that would eventually become my Dumbstruck: Cultural History of Ventriloquism, I came across John M. Hull’s Touching the Rock: An Experience of Blindness (1990). The book is an account by an academic theologian about his experience of becoming blind. In a sense the book was more than a document; it was actually part of the process whereby Hull actively became blind, or ‘existed’ his blindness, rather than just undergoing the loss of his sight. Preoccupied as I was by questions of sound and voice, the book gave me some insights, or inhearings, into the nature of auditory experience of a sensitivity and brilliance I had never encountered elsewhere. The passage that stays with me is a description of hearing the rain sizzling across his garden, and picking out its features in a kind of pointilliste sound-picture.

from Sally Shuttleworth, Professor of English Literature at Oxford University

I first encountered Andrea Barrett’s short story collection, Ship Fever, in the mid nineties when I was browsing in a New York bookshop, and have followed her work ever since. To my mind, she is by far the most accomplished, and interesting, writer when it comes to linking the domains of fiction and science.   ‘The English Pupil’, from that first collection remains one of my all-time favourites, with its wonderful portrayal of an aged Linnaeus, the man who mapped the world’s species in his mind, struggling to recall the names and details of those closest to him. Other delights include two novels The Voyage of the Narwhal, and The Air we Breathe, as well as two further short story collections, Servants of the Map, and most recently, Archangel. Barrett ranges widely across scientific fields, and the nineteenth and twentieth centuries; she trained as a biologist, and brings both scientific understanding and an acute historical sensibility to bear in her writing.   Major figures in science occasionally appear (Agassiz, for example, who features only as ‘The Professor’ in an Archangel story), but the stories are usually told from an oblique angle, exploring the ways in which science can impact on more ordinary lives. Barrett’s prose and structure are superb. You are in for a treat if you have not yet encountered her work.

from Max Pemberton, NHS psychiatrist and columnist for The Daily Telegraph

Querelle de Brest by Jean Genet is a strange, brave book bubbling with sexual energy, passion and anger. But that’s not why you should read it. Some writers are important because of their books, and some because of their lives. Genet is in the latter category. He had a difficult, traumatic childhood. His mother was a prostitute who put him up for adoption when he was one year old. He was fostered by a loving, gentle couple but his foster mother died. He began wearing make up and going out all night. He kept running away from home. He stole. He sold himself for sex while he travelled around Europe. Repeatedly arrested, it was in prison that Genet began to write. Facing a life behind bars, prominent figures, including Picasso and Sartre, wrote to the French President asking pardon for this emerging genius. And so Genet was set free. He changed his ways and focused the rage he felt towards the world onto something more productive. I’m reminded of his story when I see patients who have had difficult starts in life. His story is one of surprising hope: an example which shows us the power of words and the value of a second chance.

from Jonathan Sawday, Walter J. Ong Chair in the Humanities in the Department of English at Saint Louis University

Struggling, as a graduate student in London in the late 1970s, to make sense of the mass of early-modern writing on human dissection and anatomization which would form the core of my book, The Body Emblazoned (1995), I felt myself to be drowning beneath a sea of unsortable words and ideas. A fellow student mentioned a book that she had been reading which she felt might interest me. It was Michel Foucault’s Discipline and Punish (Surveiller et punir: Naissance de la Prison) which had just appeared in an English translation by Alan Sheridan. Thirty plus years later, many of the ideas with which Foucault conjured have been challenged, qualified, and downright rejected. His work has been imitated almost to the point of parody. And tracking down Foucault’s “sources” was like entering a looking glass world (was he just making it all up?) And yet, I can still recall the excitement with which I read that book. Yes, it might be possible to write a “history” of the human body in the Renaissance which was not a triumphal catalogue of medical and scientific discovery. I became interested in systems and institutions (formerly a rather barren topic) for what their particular histories might tell us about how people had been treated and mistreated in the past, even under seemingly benign regimes of knowledge and discovery. I still have my battered paper-back copy. Now, in an age of almost universal surveillance (Panoptican III as it has been termed) the ideas to be found in Foucault’s work seem to me to be more pressing than ever. 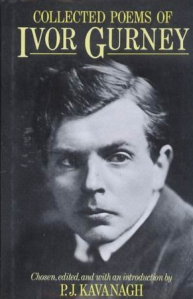 These lines, which I came across some years ago when I was reviewing a volume of verse, should be compulsory reading for any physician. Suffering with depression myself, I think anyone who imagines depression is just a malignant version of sadness should read these verses, which ought indeed to be seared into the heart of every psychiatrist:

‘Why have you made life so intolerable

And set me between four walls, where I am able

Not to escape meals without prayer, for that is possible

Only by annoying an attendant. And tonight a sensual

Hell has been put on me, so that all has deserted me

And I am merely crying and trembling in heart

For Death, and cannot get it. And gone out is part

Of sanity. And there is dreadful hell within me.

And nothing helps. Forced meals there have been and electricity

And weakening of sanity by influence

That’s dreadful to endure. And there is Orders

And dreadful is the indrawing or out-breathing of breath,

Because of the intolerable insults put on my whole soul,

Gone out every bright thing from my mind.

All lost that ever God himself designed.

Not half can be written of cruelty of man, on man.

Not often such evil guessed as between Man and Man.’

from Elizabeth Reis, Professor and Chair, Women’s and Gender Studies Department at the University of Oregon 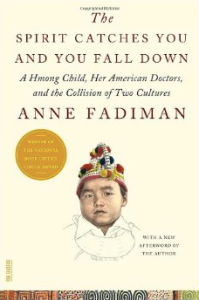 I read The Spirit Catches You and You Fall Down right after I published my first book in a different field altogether, as I was considering my next project. Though I knew I would never write anything anthropological, Fadiman’s engrossing account of one family’s fraught encounter with the medical world changed the way I thought about medicine, sickness, parenting, and healing, and certainly informed my general approach to the history of intersex. Though we might think Western medicine has all the answers (in this case about epilepsy), here was a family and culture with their own answers (about the spirit that makes you fall down), a family facing a juggernaut of institutional medical power. Everyone took the sick little girl’s best interests to heart, and yet virtually no decision regarding her care was the right one. I saw so plainly the ways in which culture, society, and medicine are inextricably linked.

from Barron Lerner, Professor of Medicine and Population Health at New York University School of Medicine

When I first read Walter and Miriam Schneir’s Invitation to an Inquest, I was immediately hooked. As a longtime aficionado of the Rosenberg case and a budding historian, the book merged activism and history seamlessly. Neither Julius nor Ethel Rosenberg had ever spied for the Soviet Union, the Schneirs argued, but had rather been innocent martyrs to America’s Cold War hysteria. So when Ronald Radosh and Joyce Milton published The Rosenberg File in 1983, I was one of many outraged lefties. Yes, the authors admitted, the prosecutors and judge were guilty of misconduct, and the death penalty was unwarranted, but Julius had been a Soviet agent. And they had proof. Still, supporters of the Rosenbergs’ innocence demurred. But we, and the Schneirs, were wrong. Classified cables released by the Soviets in 1995—and subsequent evidence—have shown definitively that Julius spied. I have always remembered this episode as demonstrating the perils of agenda-driven history. Activism is great, but does not substitute for superior scholarship.