A Brief Reflection on Maps

You would certainly know about ‘Intensive Care’ if you happened to be either an immunologist or a poet. Miroslav Holub was both. He collected a book of verses under this title in 1996. 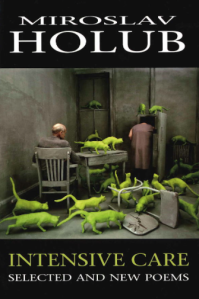 “In scientific circles I try to hide the fact that I write verse,” Holub once said. “Scientists tend to be suspicious of poets; they feel that poets are, somehow, irresponsible.”[1] Holub was a private man and he believed that the “appeal of a scientist’s anonymity” is that ”[t]here is no personal background given: no age, no numbers of girlfriends or wives or children.”[2] By the same token, he didn’t talk about his clinical vocation in front of his literary peers. A committed impersonality is apparent too when he asked his audience to “read poems in such a matter-of-fact manner as if [you]’re reading the newspaper or at a football match”. But this rejection of awe when it came to art did not mean Holub was indifferent to moments of intensity in daily life.[3] A friend of his remembered that when a patient was in a critical condition, Holub had been known to say, ”It’s a very poetic situation.”

Holub’s poems were not published in his homeland of Czechoslovakia until the end of his career, long after English audiences first read translations of his work in the 1960s (and 30 languages followed). During World War Two, Prague was under German occupation and the Nazis closed all of the city’s universities. Holub was conscripted to the railways. After the War he completed his medical training, and worked in a psychiatric ward at Prague’s Charles University. Then came further suppression of his writing from the Communist Left, laying bare a shared Soviet and Nazi intolerance to whispers of irreverence. Holub’s dissent fell just short of cause for arrest.

Holub pursued a “single goal” – to see things as they really were – by “two ways”: “Poetry and science form the basis of my experience,” he said.[4] He found dissecting the human body, for example, as sacred and mysterious as it was sanitized and meticulous:

I leaf through Old Testament slices of liver

in the white monuments of brain I read

These two kinds of close reading in the life of a writer and doctor complemented each other and colored one another. When Holub died in 1998 at the age of 75, The New York Times praised his “knifelike” way with words, and Seamus Heaney paid tribute to a talent which had exposed “not so much the skull beneath the skin, more the brain beneath the skull.”[6]

In ‘Brief Reflection on Maps’ (1977), first printed in the Times Literary Supplement, Holub recounts a “poetic situation” he had once heard about, a snippet of history which had intrigued him:

From a small Hungarian unit in the Alps a young lieutenant Sent out a scouting party into the icy wastes. At once It began to snow, it snowed for two days and the party Did not return. The lieutenant was in distress: he had sent His men to their deaths.

On the third day, however, the scouting party was back. Where had they been? How did they manage to find their way? Yes, the man explained, we certainly thought we were Lost and awaited our end. When suddenly one of our lot Found a map in his pocket. We felt reassured. We made a bivouac, waited for the snow to stop, and then with the map Found the right direction. And here we are.

The lieutenant asked to see that remarkable map in order to Study it. It wasn’t a map of the Alps But the Pyrenees.

The poem is a telling of a telling of a telling of a story. At the center of the story is a map. The map makes sense of a landscape, but the twist here is that the map doesn’t contour the immediate surroundings of the scouting party – the Alps – but rather a totally different mountain range – the Pyrenees. Nevertheless, in a moment of despair, this other map which should have been unfit for purpose, instills a form of cognitive discipline on the lost soldiers.

The lineation and structure of Holub’s stanzas are working hard, showing how as readers we also seek guidance. The first stanza has clearly marked punctuation. Although the phrases “somewhere or other” and “a thing or two” are deliberately imprecise, commas and periods end the lines and divide the clauses to steer the sense. Controlling the movement of the lines is suggestive of how “life” and the onward march of “history” is retrospectively shaped into comprehensible plots, whether as maps for explorers or stories for researchers.

But Holub takes away these grammatical footholds when the poem’s lieutenant sends his troops into the void. We lurch through the snow with the scouting party, unsure, looking beyond the line endings in the second stanza to find the assurance of a full stop. The lieutenant’s conclusion, flagged by two instances of terminal punctuation, is that the “icy wastes” must have brought his men to their “death”.

But then, as surprising as the soldiers’ reappearance, a simple sentence is contained in a single line: “On the third day, however, the scouting party was back.” The spokesperson’s explanation of events on the slopes recalls their critical disorientation, replicated in the run-over line (“we certainly thought we were / Lost”). When the map is rediscovered “We felt reassured”. And so too is the reader.

The shift in the use of “wait”, from a hopeless martyrdom (of “awaited” death), to pragmatic decisiveness (they “waited for the snow to stop”) suggests how even the wrong map refreshes the men’s outlook. They pitch a tent. They find faith that the weather will turn in their favor. “The right direction” is a mental state, which then becomes a physical reality.

The poem’s message is clearer when you know that Albert Szent-Gyorgyi, named in the first line, was a real person. A Hungarian “scientist-turned-freedom-fighter-turned-covert-diplomat” (1893 – 1986), Szent-Gyorgyi received the 1937 Nobel Prize in Physiology and Medicine for his discovery of vitamin C. As Holub’s poem tells us, he “knew a thing or two about maps” from his research charting the human body’s biochemical mechanisms, as well as from his military experience in both of the World Wars. Expertise in two professions had awakened Szent-Gyorgyi’s excitement and cynicism in equal measure.

Holub might have been inspired to retell Szent-Gyorgyi’s anecdote about the Pyrenees map after he attended a lecture given by Oscar Hechter in 1972. We know that Holub was in the audience of Hechter’s talk at the International Conference on Cell Membrane Structure where, in the context of his pathology research, Hechter voiced his admiration for Szent-Gyorgyi’s scientific endeavors. As an aside, he relayed Szent-Gyorgyi’s mountain story. Hechter’s very wording, preserved in the transcription of his lecture, bears close resemblance to Holub’s poem.

The intellectual maps and hypotheses about the role of vitamin C in the development of scurvy put forward by Szent-Gyorgyi’s predecessors were wrong to varying degrees. Like the Alps and the Pyrenees, these scientists had been talking about the same species of thing (molecules rather than mountains) but their theories did not hold true when tested in the laboratory. However, Szent-Gyorgyi liked to remind his students about the importance of attempts, whatever their validity. Indeed, the renowned parasitologist, David Keilin, was rumoured to have said to a colleague at Cambridge University that he preferred the “stimulating ideas of Szent-Gyorgyi, even when he is wrong, to the dull correct ones advanced by most others.”[7] Szent-Gyorgyi admitted to being no good at predicting where his research would take him. He hated writing grant applications because the funding institutions “want to know just what I am going to do”, he complained. “If I knew that, there would be no point in my doing it.”

For both Szent-Gyorgyi and Miroslav Holub then, a map’s accuracy is only part of the picture: it should be first and foremost an instrument for stimulating resourceful, improvised thought.

Kate Womersley is an editor at REMEDIA. She has a master’s in History of Medicine from Harvard University where she was a Frank Knox Fellow, and is currently a graduate medical student at Cambridge University.