This article is part of REMEDIA‘s Charismatic Substances series

Cinchona is the bark from a species of the homonymous genus, an evergreen tree that has its natural habitat on the eastern slopes of the Andes in South America. Presumably long a part of native Andean pharmacopeia,[i] cinchona entered European medicine from the mid-seventeenth century, principally as a remedy against what contemporaries referred to as “tertian”, “quartan” or “malignant” fevers – afflictions that can retrospectively be diagnosed as forms of malaria.[ii] Cinchona’s intellectual dissonance with humoral theory caused consternation at first among Galenic practitioners, but the bark’s advocates were eventually to prevail.[iii] By the beginning of the eighteenth century, cinchona was widely accepted in European medicine, and by the end of it, the bark was consumed intensively. [iv] In the five decades around 1800, Spanish America’s legal cinchona exports boomed at an unprecedented scale, increasing fifteen-fold; some 25 to 30 million doses of the bark were administered every year at the time, most of them in Europe and its colonial, commercial and evangelizing entrepôts.[v] Cinchona, and after 1820 its isolated and crystallized alkaloids – quinine especially – remained the medication of choice for treating malaria until the mid-twentieth century. 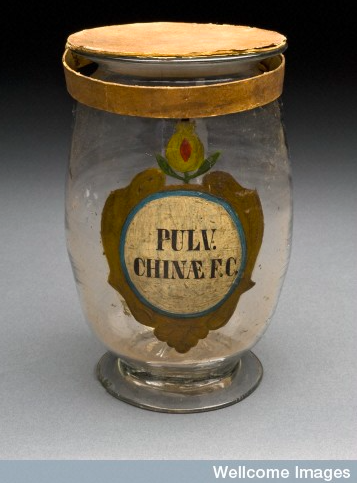 17th century jar of quinine. The jar is believed to be from the pharmacy of the Milosrdnych Bratri Monastery and Hospital Brno, in the Czech Republic. L0057596 Credit: Science Museum, London, Wellcome Images

For some time now I have been interested in cinchona consumption, principally in the decades just before quinine superseded the bark, roughly from 1760 to 1820: the export boom years. I have looked at how sufferers and their kin in different parts of the world procured cinchona, how they learned to administer it, dose it or render it palatable.[vi] Recently I have begun to wonder about the causes of the significant increase in the cinchona trade volume in the decades around 1800, a development that can only partly be explained away by economic reforms under Bourbon rule – the opening of commerce in the era of “free trade” between 1778 and 1796.[vii] Rather, cinchona trade presumably soared, as Manuel Hernandez de Gregorio, the Spanish King’s Apothecary, put it in 1804, “proportionate with an upsurge in (the bark’s) uses (a medida que crecen sus usos)”.[viii] By the term “uses” Hernandez de Gregorio likely meant both a wider range of indications and many more areas of application. As historians of pharmacology have shown, indications for cinchona were generally broadened over the eighteenth century: the bark’s success in “intermittent fevers” suggested the idea that it might be useful in other types of fevers as well – yellow, “bilious”, or “nervous” fevers – but it was also tried in cases of epilepsy, gangrene, smallpox, dysentery, the gout, to induce the menses and halt sneezing fits.[ix] While the coming and going of novel indications may in part account for greater demand, however, cinchona remained primarily an anti-malarial substance. Hernandez de Gregorio’s reference to “an upsurge in the bark’s uses” would therefore also, and perhaps chiefly, have referred to Europeans’ unprecedentedly frequent and intense encounter with malarial fevers in the decades around 1800, and their increased need of a substance they believed could provide sanctuary from that disease. 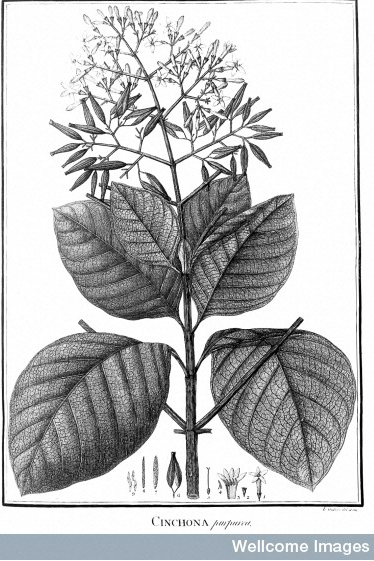 Northern European malaria has nearly disappeared from our collective memory, but over the early modern period, “tertian fevers” – a comparatively benign but chronic variant of malaria – had become endemic in the brackish coastal zones of Flanders, the Baltic, East Friesland, Denmark, and the saline and riverine marshlands of France or south-east England.[x] As the Mainz doctor Johann Claudius Renard put it in 1809, “an absurd (ungeheure) amount of cinchona”[xi] was trafficked, and administered “in every form”, in areas stricken with malaria in the Holy Roman Empire, the Kingdom of France, Denmark, and Britain in the late-eighteenth century – to the well-off, but also, due to increasingly systematic medical poor relief, the more marginal strata of societies. England imported, by the last two decades of the eighteenth century, an average of one dose of cinchona per every two people – a multiple of early-eighteenth century imports – and ratios were comparable in other affected areas of Europe.[xii]

Not only did malaria impose a heavy burden of suffering, poverty and death on men and women in late-eighteenth century northern Europe, urbanization processes unfolding at that time may have aggravated the situation. In Western Europe and across the Americas cities were growing at an unprecedented rate between 1750 and 1850 – owing to industrialization as well as Spanish and British overseas policies: poor water supplies, housing, and drainage created ideal breeding sites for Anopheles vectors and malaria was a crucial plague in these newly created high-density environments.[xiii] Urban dwellers in malarial cities drugged themselves at a scale out of all proportion: in Cartagena de Indias, the resident population consumed cinchona regularly, and presumably pre-emptively – between 36,000 and 73,000 doses every year, at a time when that city had but around 20,000 inhabitants.[xiv] Cinchona consumption in cities like Lyons, Kent or Lima ranged at similar levels.

Military use of cinchona also expanded greatly in the period. Cinchona became a standard element of military medical supplies from the time of the Atlantic Revolutions, concomitant uprisings in British North America (1775 – 1783), France (1789 – 1799), Saint-Domingue (1791 – 1804) and Spanish America (1810 – 1824) that took large armies to some of the world’s most lethal zones of tropical malaria: the Caribbean[xv] and the southern British American colonies.[xvi] In some regiments of the French, Habsburg and, from the reign of Charles III (r. 1759 – 1788), the Spanish army, cinchona even appears to have been administered prophylactically: already some contingents of the Habsburg army stationed near Belgrade during the Austro-Turkish War – where malaria “did more damage among the troupes than the Turks ever did” – drank it “twice of thrice a day” “dissolved in liquor”[xvii] and so did “the French forces” during the Revolutionary Wars.[xviii] When Spain’s imperial troops were sent off to protect highly malarial Navarra in 1793 during the Revolutionary Wars, its medical provisions comprehended ten times as many doses of cinchona as the army had soldiers.[xix]

Settler societies along the world’s ecological frontiers also relied heavily on cinchona. In the five decades around 1800 European settlers first drastically advanced frontiers in different parts of the world and in many of these newly cleared regions – in post-revolutionary North America or gold rush Atlantic Brazil – malaria came to exact a heavy toll of morbidity and mortality among the “pioneers”.[xx] Cinchona consequently was a standard item in apothecary shops, the chests of barber-surgeons or hospitals in places like Minas Gerais, Louisiana and New England alike.[xxi]

Trans-Atlantic migration and settlement certainly exposed Europeans to more aggressive forms of malaria, encouraging the use of cinchona bark, but so did European colonial expansion more broadly. Malaria had long represented perhaps “the most powerful barrier to the projection of European influence in the tropics”[xxii] and cinchona came to be widely consumed during the “First Age of Global Imperialism” between 1770 to 1830, by Portuguese, Dutch, British and French traders, soldiers, and officials in endemic falciparum areas in the Caribbean, South Asia and especially, West Africa. The merchant community in Portuguese Luanda, Western Africa’s largest slaving port, and the factors of the English Royal African Company along the Guinea coast were administered, or self-administered, cinchona bark both curatively and pre-emptively and so did sailors on board slave ships off the African coast, the vessels of the Dutch East India Company or the English Navy as well as government officials in Dutch Berbice or British India.[xxiii]

Colonial expansion was but one of a series of changes around 1800 that exposed Europeans to malaria to an unprecedented extent; transatlantic warfare and migration as well as the spread of malaria at home were other such transformations. All of them would have made Europeans seek refuge in substances they believed could cure or ward off malaria, the most popular and important of which was cinchona bark at the time. The significant increase in the cinchona trade volume in the decades around 1800 was therefore, at least among other things, a result of a series of profound transformations in Europeans’ political conflicts and colonial ambitions, their patterns of settlement, migration and mobility.

Stefanie Gänger is assistant professor for Iberian and Latin American History at the University of Cologne in Germany. Her research focuses on the history of malaria therapy and medical botany in the eighteenth century; she is currently completing a book manuscript tentatively entitled “A Divine Remedy”: Cinchona, Malaria Therapy and World History, 1751-1815.

[iii] On the gradual process in which cinchona was accepted into European materia medica, see Andreas-Holger Maehle, Drugs on Trial: Experimental Pharmacology and Therapeutic Innovation in the Eighteenth-Century (Amsterdam: Editions Rodopi, 1999). 223-8.

[vii] See Fisher, Commercial Relations Between Spain and Spanish America in the Era of Free Trade: 70.

[xxi] On North Americans’ access to the bark, see Norman Gevitz, “”Pray Let the Medicine be Good”: The New England Apothecary in the Seventeenth and Early Eighteenth Centuries,” in Apothecaries and the Drug Trade. Essays in Celebration of the Work of David L. Cowen, ed. Gregory J. Higby and Elaine C. Stroud (Madison: American Institute of the History of Pharmacy, 2001), 15. On cinchona consumption in Brazil, see Timothy D. Walker, “The Medicines Trade in the Portuguese Atlantic World: Acquisition and Dissemination of Healing Knowledge from Brazil (c. 1580–1800),” Social History of Medicine 26 (2013).