In 1944, sixteen-year old Madonna Mary Swan confessed to her teacher, “I don’t want to die like they did, far away from mother and father, not seeing them again.”[1] She was referring to her friends who had succumbed to tuberculosis and to her own secret worry she would meet the same fate away from her family who lived on the Cheyenne River Sioux Reservation. Her diagnosis and transfer from boarding school to the Sioux Sanatorium in Rapid City, South Dakota that year only exacerbated her fears. Swan was held against her will at the “Sioux San” for six years—while receiving almost no medical treatment—until she escaped in 1950.[2] Madonna Swan was one of thousands of American Indian boarding school students who became sick while attending school. Her 1991 “as told to” memoir of separation, institutionalization and disease provides a window into the imposition of institutions on Native bodies as well as the choices and coercions thousands of American Indian students faced from the 1870s to the 1950s and beyond.

Boarding schools became the primary tool for “Americanizing” Native youth. They arose out of the “Friends of the Indian” reform movement under the guise of “humanitarianism.” In the 1870s wealthy philanthropists like Helen Hunt Jackson observed scenes and circulated stories about violence, starvation and epidemics on reservations.[3] Many reformers had strong political connections and, believing reservations would annihilate the already “vanishing Indian,” they formed advocacy groups and pressured Congress and the Office of Indian Affairs (OIA) to assimilate American Indians into white, mainstream life. To do this, they successfully argued, the federal government would have to mold American Indians into Christian, English-speaking, self-supporting citizens living on their own property. Breaking tribal lands into individual allotments was one pillar of assimilation policy.[4] The other was the suppression of Native cultural practices and language which was a job left to Indian schools.[5] 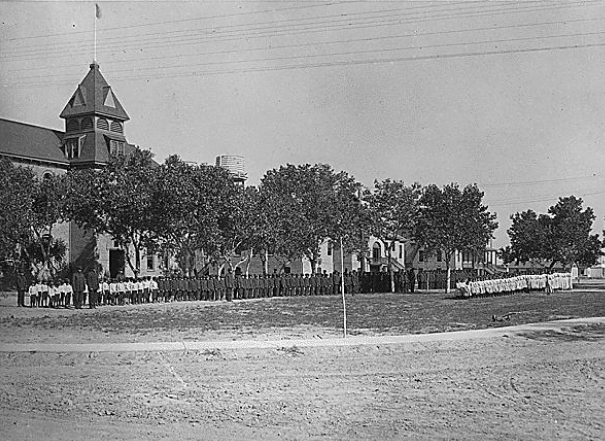 Beginning in the 1880s, officials from the OIA began to relocate thousands of American Indian youth to boarding schools with the intention of—in the language of assimilationists—“preparing” them for life in a “civilized” culture and economy. In 1900, the commissioner of Indian affairs estimated 22% of eligible Native youth were enrolled at 25 off-reservation boarding schools while another 28% attended on-reservation boarding schools and 27% attended reservation day and contract mission schools.[6] Many indigenous families used boarding schools as a social sanctuary to offset the burdens of poverty, death and disease on the reservation. Many also strategized that their children should learn about the U.S. government to become successful advocates for their tribal nations in the future.[7]

Officials relied on boarding schools to provide isolated spaces where Native youth could receive a Euro-American education safely out of reach of their families. By assimilationist standards most American Indian communities were considered to be “primitive,” “immoral,” and therefore “unsanitary.” But these estrangements between youth and their families were never totalizing. Parents camped nearby, wrote to their children and even took jobs at the schools to stay united.[8] To the vexation of some school administrators, most students, especially in schools west of the Mississippi, returned home during the summer vacations. Assistant commissioner E.B. Merritt elucidated the OIA’s opposition to students returning home in a 1914 letter to a reservation agent. Blaming the spread of disease in schools on “the promiscuous visiting between parents and children,” Merritt wrote, “While it is, of course, known that such visiting cannot altogether be eliminated, it should be curtailed by you as much as possible.”[9] Certainly reservation conditions in many areas were dire due to underfunding, but Merritt and other government officials identified the older American Indians’ “ignorance” as the root of the problem. Furthermore, Bureau administrators’ frustration grew as many healthy graduates returned home despite the schools’ goals for students to integrate into white communities.[10]

Reservations were viewed as a danger to assimilation, but schools also harbored their own threats to the assimilationist project. Compulsory education and enrollment quotas which began in the 1890s quickly led to overcrowding.[11] Meanwhile several possible causes of tuberculosis circulated: heredity, climate, diet, miasma, germs, and the transition from purportedly “free,” outdoor lifestyles to sedentary, indoor ones all found support among government officials and a lack of consensus stifled prevention efforts.[12] Competing theories of disease along with a reliance on student labor, unsafe buildings, chronic underfunding, and insufficient nutrition only fueled the growing health crisis as epidemics rolled through the schools.[13] Of particular concern were trachoma and tuberculosis, two infectious diseases that spread unchecked for decades in most boarding schools. Unlike tuberculosis, trachoma, an eye infection, is not lethal, however it can lead to blindness and in the early twentieth century it was difficult to treat. In 1909, the OIA learned that 65% of the students at Phoenix Indian School had contracted trachoma. The year before, physician Aleš Hrdlička had visited the school and learned that over the course of the school year five of 28 new Tohono O’odham students had been sent home with tuberculosis. Two of them had since died at home and two others remained at the school but were likely also infected.[14]

Separate Towels in Name Only

Poor sanitation and inadequate facilities were central reasons for school epidemics: towels and toothbrushes regularly contaminated each other and until 1909, sharing beds was openly acceptable and often necessary—although the practice persisted long after.[15] Progressive-era administrators first attempted to respond to the problem with inexpensive health education and disinfection efforts. Some school superintendents begged for updated facilities, but often the commissioner’s office were slow to approve any changes, deeming such improvements too expensive. In 1909, the first (small) appropriations specifically for student health led OIA officials to consider expanding isolated spaces for the sick. That same year, two school sanatoria opened, one at Phoenix Indian School and the other at Chemawa School in Oregon.[16] Progressive-era interest in student health seemed headed toward a robust network of institutions to isolate indigenous youth and contain and cure the sick. But the First World War diverted funds from internal affairs. So while schools and sanatoria stayed in place, Native health problems also remained conspicuous. Into the 1920s, the federal government, with the OIA’s moral support, remained tightfisted and many of the school health problems that arose in the early twentieth century endured for decades.[17] For instance, in 1928 an independent surveyor observed that in one boarding school only two water closets serviced 80 girls. The others, he reported, were clogged and overflowing.[18]

Families were not ignorant of unsanitary school conditions and high disease prevalence. School administrators often sent home sick and dying pupils, partly at the behest of parents and partly to improve their mortality statistics. But as children left healthy and returned ill, parental distrust for boarding schools quickly grew.[19] In October 1901, Flora Gregg, a day school teacher for the Havasupai in Arizona wrote to Indian commissioner William Jones advising him on the matter of boarding school enrollment. While parents normally gave permission for their children to attend the day school, she observed, “The one great fear expressed by all Indians whom I have heard discuss this subject is that the child may become sick and die among strangers.”[20] Disease and distance compounded parents’ anxieties over their children’s wellbeing. The OIA blamed infected parents, while parents blamed infected schools. By physically and discursively transforming Native parents and children into infectious vectors, the OIA and its boarding schools pathologized their relationship and subjected family love to the logic of “contamination.” Meanwhile, families often said the opposite: that Indian schools made their children sick, feeding many American Indians’ growing and justified criticism of the OIA and federal policy.

Following the formal end of assimilation policy in 1934, some boarding schools closed, but others were converted into sanatoria to continue efforts to control Native bodies. For instance, Madonna Swan’s story reveals the long reach of assimilation into the 1940s and 1950s. Swan knew the building of her second confinement as the Sioux Sanatorium, but prior to 1939 it had been the Rapid City Indian School. In 1950, Madonna Swan escaped the “San” with the help of her sister and a Lakota nurse. But she did not return home for long. Instead Swan surveyed the medical landscape and petitioned the governor of South Dakota to allow her entrance to Sanator, the public (i.e. White) sanatorium. There she received better care, including surgery, and eventually recovered.[21]

Overall, migrations to boarding schools were meant to erase Native culture and “improve” what officials saw as “unhygienic” standards of living on reservations through education. But government apathy, inadequacy, and violence allowed poverty and disease to invade Indian Country—in particular through unhealthy schools—and no amount of hygiene lectures or isolation could solve the problem. While disease tarnished the assimilation project, germs also provided a rationale for separating children from their families. Yet for many parents boarding schools and sanatoria represented hope and risk simultaneously and individual circumstances and experiences affected reactions to OIA health initiatives and the assimilation project.[22] Families and students alike read the colonial landscape, manipulated its offerings to suit their needs, and worked hard to stay together in the face of colonial violence. Reflecting on why she escaped Sioux San, Madonna Swan recalled the urgency she felt to return to her family: “Death could have me, I thought. But not before I get home again!”[23]

Juliet is a PhD Candidate in History at Vanderbilt University. She received her bachelors degree in Health and Societies from University of Pennsylvania and her masters in history from Vanderbilt. Her dissertation is tentatively titled “Native Health on the Move: A History of Disease, Travel, and Assimilation in Arizona, 1900–1934.” It explores perspectives on disease prevention and treatment in the context of public health and assimilation policy implementation the ground and back in Washington.

[2] Swan attended the Immaculate Conception boarding school. Though not a government-run school, it was under contract with the OIA, followed a similar model to government schools, and dealt with similar health problems.

[3] For example, see Helen Hunt Jackson, A Century of Dishonor: A Sketch of the United States Government’s Dealings with Some of the Indian Tribes (New York: Harper & Bros., 1881). Prominent reformer organizations include the Indian Rights Association (1882–1986) and the Lake Mohonk Conference (1883–1916).

[4] The General Allotment Act, or Dawes Act, of 1887 authorized terminating tribal land rights and apportioning lands to individual American Indians. All non-allotted lands would be recategorized as “surplus” and sold to white settlers.

[6] United States, Office of Indian Affairs, Annual Report of the Department of the Interior, Indian Affairs: Report of the Commissioner and Appendixes, (Washington, DC: Government Printing Office, 1900), 16-23. hereafter CIA, AR [year]. Jones estimated about 11,000 children were ineligible for school due to disease, disability, integration in white public schools, or otherwise off reservation.

[7] Margaret D. Jacobs, White Mother to a Dark Race: Settler Colonialism, Maternalism, and the Removal of Indigenous Children in the Americas West and Australia, 1880-1940 (Lincoln: University of Nebraska Press, 2009),191.

[17] Putney, “Fighting the Scourge,” ch. 9. Where bureaucrats did spend their money, it often met further failure. For instance, in the 1920s, the OIA began an aggressive trachoma campaign in the Southwest that focused its efforts on a radical and ineffective eye surgery