The Backstage of Hysteria: Medicine in the Photographic Studio 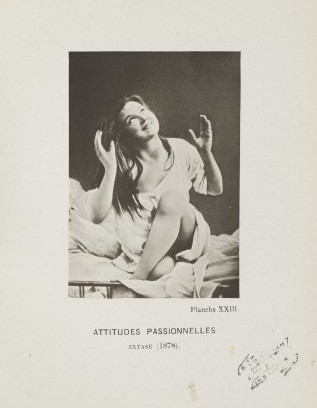 This image of Augustine, a famous patient with hysteria at La Salpêtrière hospital in Paris, has served historians in many ways. It has been used to examine the hysterical body, the women interned at La Salpêtrière, Jean-Martin Charcot’s approach to medical practice and his uses of photography in medicine [Fig. 1].[1] Historians have also used Augustine’s image to examine the passionate poses and spectacular character of her hysteric attacks, which has encouraged consideration of the performance these patients, whether they were willing to adjust their behaviour to their doctors’ expectations.[2] In each of these discussions, the photograph comes to speak at once for hysteria, the practices of La Salpêtrière and medical photography more generally.

But the photograph can tell a different story. An article published in La Nature in 1883 entitled, “Photographie à la Salpêtrière” allows us a rare glimpse behind the picture’s familiarity. The article described a new camera invented by the photographer Albert Londe.[3] One of the two engravings illustrating the piece showed the photographer operating the camera. These engravings made visible the backstage of the patient’s performance, which has since so often been removed from view: the photographer looking at the patient, ready to press the button, surrounded by the room’s furniture illuminated by the large windows [Fig. 2].

Though this scene might appear mundane, it opens up a new narrative. Londe pressing the button evokes what we easily forget: that photographs have always been made by a photographer who is equipped with particular devices in a specific place at a set time. La Nature’s illustration shifts focus away from the content of the image to the making of the photograph. In doing so, it reminds us that photographs are never disembodied, but rather objects created in particular circumstances.

In order to understand medical photographs, then, we need to examine the material practices through which they are made. In this article, I explore how photographic practices and medical theories at the Salpêtrière were mutually constitutive. I provide a fresh look at the material relationships between patients, doctors, photographers, laboratory technicians and the visual objects they created.

Photography at the Salpêtrière

Photography was incorporated into the daily activities of the Salpêtrière in the mid 1870s. Charcot’s clinical method was based on close observation of his patients, and he found his best ally in this highly visual practice which could still the subject’s behaviour for later review. In 1878, Charcot and his intern Bourneville secured public funding to reorganise the Salpêtrière and construct an amphitheatre for public lectures, a research laboratory, an electrotherapy room, an art studio, a pathological museum and a photographic studio[4]. In 1893, La Salpêtrière opened a second photographic studio. Both studios served different medical purposes and operated with particular technologies, to generate a singular relationship between patient and photographer, which in turn created different kinds of images.

The idea of photographing patients came from Bourneville, who was also a prolific journalist. He played a key role in the establishment of the well-known journal Iconographie photographique de la Salpêtrière in 1875, which integrated clinical stories with photographs of patients in their normal state to compare with those of them during attacks. It was in this journal that the photographs of Augustine and her story were first published in 1878.

The photographer was Paul Regnard, a medical intern and not a professional photographer. The photographs’ stated purpose was to help Charcot and other clinicians identify the somatic signs of hysteria. Hysteria was difficult to diagnose because its symptoms were unstable, differing from one patient to the next, variable criteria existed between clinicians and the signs often mimicked other diseases. Photographs, by fixing the movements and gestures of the attack, could help doctors find patterns and characterize phases [Fig. 1].

As photographs sought to capture the attack, the camera chased the patient. Doctors could not predict when or where an attack was going to happen, and therefore most of the photographs were taken in the patient’s bed. Regnard was working with wet collodion plates, which was the most common procedure in the 1860s and 1870s. It took approximately one second to take an exposure with this technique, but the images often included blurred spots if the patient moved quickly. This procedure also required a good light source, and therefore many photographs were taken outdoors [Fig. 3]. Therefore, medical priorities, as well as the materiality and technical requirements of the photographic equipment, determined the kind of images taken, and the places in which they were taken. Although there was a photographic laboratory, most of the photographs were in fact not taken there.

Both Bourneville and Regnard left the Salpêtrière around 1880, and the clinic stopped publishing the Iconographie photographique. However, this didn’t mean the end of photography at the Salpêtrière. Loreau, modeller at the pathological museum, continued taking photographs. More importantly, in 1882 the photographer Albert Londe was hired as chemist at the laboratory, and he became head of the photographic service in 1884.

Protocols and the photographic studio

Londe was a photographer, but like many of his contemporaries, he was not a photographer by today’s definition of the vocation. He took and developed the images, invented his own cameras, worked on forging new techniques, and conducted research on many subjects including artificial light and radiology.[5] Photographing sea waves, fireworks or pathological bodies entailed different challenges, and Londe always sought to construct the technological device that could perfectly adapt to each circumstance

La Nature’s engraving seems to show the photography of a hysterical attack like the one in Augustine’s picture, but it does not [Fig. 2]. The image was published in 1883 after Regnard and Bourneville had both left the hospital. More importantly, there are a couple of elements that differentiate this image from the photographs previously examined. As we can see here, the camera was not easily transportable, suggesting that the photograph was taken in the studio rather than in the patient’s room. This hypothesis is confirmed by the large windows, characteristic of studio spaces which allowed for a lot of light.

This engraving shows some of the changes implemented by Londe after his arrival. He stopped photographing patients in the bed or the garden, and concentrated in developing further the photographic studio. Londe’s innovations materialised in his 1893 book La photographie médicale, the first work entirely devoted to medical photography.[6] This map, included in La photographie médicale, illustrated an exemplary installation, which included a glazed studio, a dark room and a light room [Fig. 4]. The book provided a detailed discussion of the best materials to use according to the needs of each piece of equipment (camera, lens, shutters and other supplementary devices, such as equipment for the specific requirements of photographing hands) and according to the space in which images were produced. He discussed the best orientation of the studio and each of the rooms, the furniture, the possible background colours (black, deep grey and light grey), and how to build a stage.

The book’s organization was intended to systematise photographic production. As Londe and others argued, photographs enabled comparison between different cases without the presence of the patient. Comparison required at least some similarity between the subjects, but not all patients showed symptoms in the same way, and some details did not become recognised as signs until they were seen in many patients. Londe argued that photography would provide a unique framework within which different images of patients could be compared.

All patients were photographed under the same circumstances: [Fig. 5] on the stage, with the same furniture (chair), against the same background, at the same distance, and under the same light. The published photographs were later cropped in order to emphasize this continuity between bodies. Through this standardized procedure, Londe not only guided photographers but provided them with the first established protocol for medical photography, including instructions on equipment and space.

This shift in photographic practice shaped the kinds of images produced at the Salpêtrière. Women in ordinary day-to-day clothes performing onstage to replace the sexualized images of women in nightdresses on beds. This change in photographic practice corresponded to a shift in medical practice, as doctors began increasingly to focus on hypnosis and nervous disorders from the late 1880s, rather than hysteria. The medical photographs of this period accelerated and consolidated such a change.

Chronophotography and the outdoor laboratory 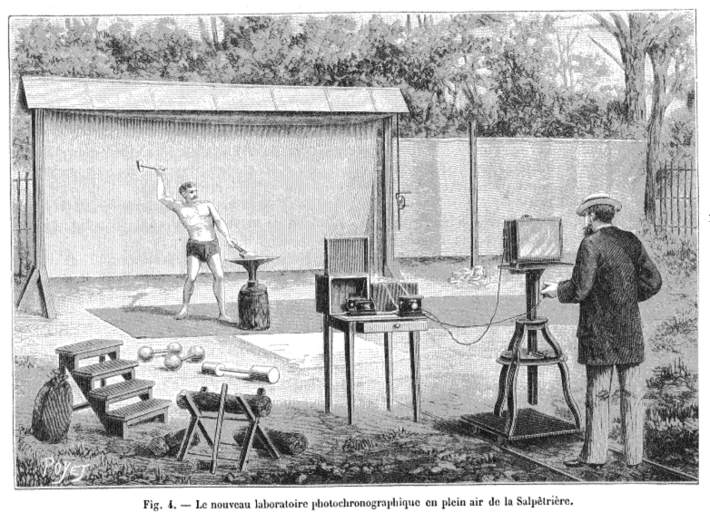 Thanks to funding provided by the Paris city council, a new outdoor photographic laboratory was created in 1893, designed specifically to take chronophotographic images.[Fig. 6] [7] It consisted of a big screen – 19 x 10 feet aproximately – against which the subject could be easily and naturally perceived. Against this background, there was a track where the photographed subject performed. Perpendicular to it, there was another track that guided the movement of the camera, so that it could approach or retreat while maintaining the same angle.

Londe also designed a new chronophotographic camera in 1893. It had twelve shutters that were arranged in three parallel lines, so that the plate could be fully exposed, providing twelve images organized in three rows of four. The aim of this device was not to take the largest number of images in the shortest period of time, but to take enough images to “capture the attitudes that can escape direct observation” and to discover the “general march of the movement under analysis.”[8]

This camera was designed specifically for Paul Richer’s research on the anatomy and physiology of movement. While Richer’s research abandoned the framework of hysteria, Londe’s photographic method preserved aspects of previous practices. Chronophotography aimed to capture the movement of the patient, making it visible and durable – just as the first images taken by Regnard had done. But the analysis of movement had to be systematic: photographing random instants was not enough. To this end, Londe incorporated elements developed in the studio intended to control the photographic act. These elements were both spatial (the neutral background, the stage, the measurement of the distance between the patient and the camera) and practical, as both the photographer and the model had to follow a set of instructions to ensure that photographs were produced in a systematic way.

For Roland Barthes, who defined photography’s essence as “this-has-been”, photographs always bear witness to a past moment [9]. The relationship between medical research at the Salpêtrière and the successive photographic studios has demonstrated that photographs not only relate to time, but also to space. Considering medical photography in terms of place allows us to look beyond the image and expose its role as a medical procedure, a procedure regulated and shaped by medical practices and the materiality of changing photographic technology.

Beatriz Pichel is Research Fellow at the Photographic History Research Centre, De Montfort University, Leicester, UK. Her research is at the crossroads of photographic history, history of medicine and the history of emotions. She has had papers recently published in History of the Human Sciences, Fotogeschichte and the Journal of War and Culture Studies. Her new project is a material history of medical photography.