Tasting Old Foods of the Future

It was only by accident that I first realized I was drinking archival material. My research focuses on famine and humanitarian relief, and I had been researching a variety of superfoods in the late twentieth century. Effectively, I was collating a list of notable products that had been peddled for their supposedly extravagant nutritional qualities. Through a convoluted bit of luck, I happened upon the Board on Science and Technology in International Development (BOSTID), a little-known U.S. government research group that seemed to straddle the line between global agricultural development and science fiction.[1] From its start in 1969, BOSTID published a number of studies on future development possibilities around the world, focusing especially on the global South.

While this sounds like the actions of a standard research division, take a look at some of the studies: “Butterfly Farming in Papua New Guinea,” “The Water Buffalo: New Prospects for an Underutilized Animal,” “Crocodiles as a Resource for the Tropics,” and my favorite, “Microlivestock: Little-Known Small Animals with a Promising Economic Future,” a report that seriously explored the widescale feasibility of many small animals, including rats and teacup pigs, to be raised to meet food scarcity goals.[2]  As an indication of how thorough the reports were, the study came with an advisory warning about the dangers of not safely breeding rats. BOSTID oversaw comprehensive research reports on a multitude of subjects, many of which were precursors of modern food advancements. The studies along these lines that caught my eye were the “Lost Crop” series. 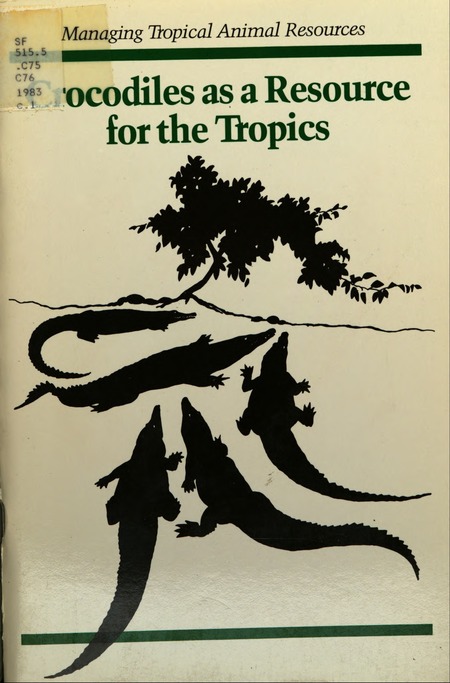 Frontpage of “Crocodiles as a Resource for the Tropics,” a report published by BOSTID, 1983

Throughout the 1980s and into the 1990s BOSTID created several reports on previously “lost” or “undiscovered” crops, almost uniformly in Latin America, Asia, and Africa, that had promising futures for global production. Notably, these reports emphasized a strange line of thought for a government research agency focused on modern development: the notion that decidedly “unmodern” civilizations had a genuine contribution to make toward future food stability, a field that was, and largely still is, dominated by technological innovations in crop yields and other measures of agricultural efficiency. This was particularly true when BOSTID was creating the reports in the immediate years after the heyday of the agricultural advances of the so-called Green Revolution, which had occurred in the late 1960s. The Green Revolution was a series of agricultural advancements that focused on breeding plants with higher crop yields alongside the rapid spread of modern technologies and irrigation methods. Old foods, including amaranth, the winged bean, and something I found called spirulina, were discussed in the reports as the possible superfoods of the future in the years after the Green Revolution had radically shifted global agriculture to this more modern, technologically focused model. The downsides of the Revolution became apparant as developing nations and poor farmers were not easily able to afford the pesticides, irrigation methods, and newly created high yield crop varieties. Alternatives to the Revolution, including these cheaper “lost” crops, were proposed quickly after the Revolution’s limitations were realized.[3]

As I came to discover, spirulina is a microalga usually found near brackish waters.[4] It has a storied history and a surprisingly wide distribution around the world, growing naturally in Asia (particularly Japan), Mexico, and throughout Sub-Saharan Africa. The first historical record of spirulina consumption was by the Aztecs, who called it tecuitlatl (the “excrement of stones”), and if you go through conquistadorial accounts of the Siege of Tenochtitlan in 1521 you will find that the Spaniards, including Cortez himself, tried it and reported that it had a pleasingly cheesy flavor.[5] Spirulina was “rediscovered” in the 1950s and 60s by researchers in Mexico, where it still grew in Lake Texcoco near where the Aztec capital city of Tenochtitlan was, and quietly spread among health food advocates and scientists as a possible superfood of the future. As it hit world markets in the early 1980s, spirulina became a health food fad, one that waxed heavily during that decade before waning in the 1990s.[6] It is seeing a resurgence in the present day, as health foods dominate the market.

Spirulina’s health fad boom was buoyed by its popularity among the rising New Age movement, which folded spirulina into its wide embrace as it sought to buck the health recommendations of Western governments and doctors.[7] For many, spirulina represented an old solution, harkening back toward abstract notions of the wisdom of older civilizations, of bucking the modern in favor of the proven solutions of the past. It should be noted that such ideas did not fade with the New Age movement, as ancient grains, including amaranth, have seen a return to popularity in recent years based on a similar premise and their wide applicability in the rising market of gluten free products. Conceptions by both the public and professional worlds tend to cast nutrition and health as continuously chasing after the future, but this narrative has just as often looked toward the past to do so.[8]

Spirulina caught my attention because I realized that I had seen it before. Moments before, in fact. As I read through the BOSTID reports for the first time, I had been looking at the ingredients of one of the Naked brand smoothies I was drinking. Sure enough, there was spirulina, along with something called chlorella, both labeled as blue-green algae. I realized that I was actively consuming the history I was reading. I tell all of this to demonstrate the strange persistence of certain crops, but also to make us think about our own subject matter in a more relevant light. The histories of any of the subjects that historians study are usually present around them in some fashion if they look hard enough. Yet, scholars of food and nutrition find ourselves in the enviable position of being able to enjoy that realization in the most tangible of ways.

We should savor this more often: it allows us a personal insight into the experiences of the people and subjects we study. The fact that we can attempt to taste the paste can provide valuable knowledge about what I have often heard described as the “texture” of history, the intangible “grit” that historical accounts in the texts that form the bulk of archival documentation, or even photographs, cannot. This is the draw of historical food recreations for popular audiences.[9] For scholars, too, this can help fill out the context of daily life for our subjects. Like all historical methodologies, however, such efforts should be tempered by the realization that we usually cannot fully recreate the foods of the past, and we do not simply taste the same foods as the historical actors we study. After all, our palates are different, and our ingredients have changed in the most fundamental ways through agricultural technology. Yet, as the odd case of spirulina shows, we should not neglect the foods of the past, as they so clearly keep cropping up again in our present.

Christian Ruth is a PhD candidate in history at the University at Albany, SUNY. He received his BA and MA in history at the University of Kentucky. His research focuses on the intersections between US foreign relations, human rights, and environmental development politics in the late twentieth century. His dissertation is titled The Bitter World: Famine, Foreign Aid, and Development in the Cold War and examines the evolution of the basic human needs concept during the later years of the Cold War. For more of his work on spirulina, you can read his recent article for Nursing Clio.

[1] The author would like to thank Anna Flores, Tina Peabody, and Shannon Missick for their help in revising this article.

[3] National Research Council, Board on Science and Technology in International Development, Lost Crops of the Incas: Little-Known Plants of the Andes with promise for Worldwide Cultivation (National Academy Press, 1989).

[9] See Michael W. Twitty, The Cooking Gene: A Journey Through African-American Culinary History in the Old South (Harper Collins, 2017). Twitty, a culinary historian, also has a popular blog where he explores the histories of African, African-American, and African diaspora communities’ food cultures: Afro-Culinaria.