DNA Diets and the Dangers of Dietary Essentialism

DNA diets are a recent trend hitting mainstream weight-loss programs, answering the vexing question of what we all should eat with dangerous precision: eat according to your genetic profile. More than 12 million people now have access to their genetic data, largely due to the rise of at-home genetic genealogy kits like 23andMe or AncestryDNA. Popular gene diets include the 2006 Gene Smart Diet, the 2016 The DNA Restart, or the 2016 Think Yourself Thin: The DNA System to Reprogram Your Own Brain to Lose Weight and Keep It Off. Even celebrity physician Mark Hyman used the tagline “awaken the fat-burning DNA hidden in your body” for his popular 2006 book Ultrametabolism.

DNA diets represent the mass popularization of essentialist views of human difference. They allow even those who have not formally taken a DNA test to self-diagnose their genetic identities. The 2007 GenoType Diet used the poor man’s 23andMe – a 30-minute questionnaire called the “GenoType Calculator,” which asks dieters for index-finger and torso-length measurements, caffeine sensitivity, blood type, and fingerprint patterns – to determine their particular genetic profile.

Today, some companies combine DNA testing with diet recommendations, like the UK firm DNAFit that charges $334 for an at-home saliva test, complete with a tailor-made genetically-optimal diet. Somewhat breathlessly, DNAFit estimates the personal genomics market for health and diet will grow from $1.3 billion in 2018 to $50 billion by 2026.

But DNA diets do not simply provide genetically targeted dietary prescriptions. They intimate that human races may have evolved from such different origins as to require diets specific to the period in which they evolved. By doing so, they veer dangerously into a racist program of dietary essentialism and revive an older intellectual strain of polygenism.

Dietary essentialism based on genetic difference was inspired by the blood-type diets of the 1990s. Peter D’Adamo’s 1996 blockbuster Eat Right 4 Your Type sold upwards of seven million copies. In the book,  D’Adamo called blood type a “cellular fingerprint” and a “genetic blueprint” that determined how people responded to different diets.  Certain blood types, he argued, were more evolved (or recent additions to humankind) than others, and “older” dieters needed to follow a less modern dietary program to achieve optimal health.

First distinguished in 1901, the A/B/O blood groups indicated the presence of different antigens. But D’Adamo clumsily imposed a theory of human development and racial difference onto red blood cells and forged an elaborate system of dietary essentialism. According to him, Type O blood stood for “Old,” meaning that Type O people emerged out of Africa around 60,000 years ago and represented the oldest stage of evolutionary development, predating agriculture and permanent settlement. Type Os were “skillful and formidable hunters,” D’Adamo believed, and required high-meat diets. Type A, by contrast, stood for “agrarian” types who emerged from the New Stone Age, while Type B was a “balance” between nomadism and agrarianism. Type AB, finally, represented the modern diversity of migration and the “intermingling of Type A Caucasians and Type B Mongolians.” 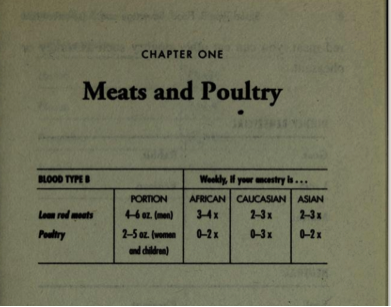 Today, blood types are thought to be loosely correlated with different ethnic groups: many more Central and South Americans, for example, are Type O than Eastern Europeans, who are more likely to be Type B. Competing theories account for ethnic variations. But scientists agree that blood types have no bearing on optimal diet.

The blood type diet directly inspired the 2007 GenoType Diet, D’Adamo’s follow-up program. It grouped the human race into six different dietary categories of hunter, gatherer, nomad, explorer, teacher, or warrior.  According to D’Adamo, each category emerged at a different point of evolutionary development: for example, “hunter” emerged before “gatherer,” but “nomad” came after “explorer.”

The six GenoTypes denoted biological difference and hierarchy in a single gesture.  D’Adamo ranked the six genotypes according to dietary and digestive potential: the long-legged, thin, detail-oriented “hunter” was positioned at the top; this “great success story” of human evolution possessed an “absolutely superb-metabolism – perhaps the best of the six GenoTypes,” according to D’Adamo. If you were a hunter, you could think of yourself as a “top-of-the-line sports car that burns high-octane fuel.”

The “explorer,” by contrast, emerged about 15,000 years ago and was marked by a chiseled face, an elongated torso, and an opportunistic worldview. Explorers were instructed to eat more fish and seafood than the hunters, who in turn benefited from a meat-heavy diet in keeping with their place on the timeline of human development. 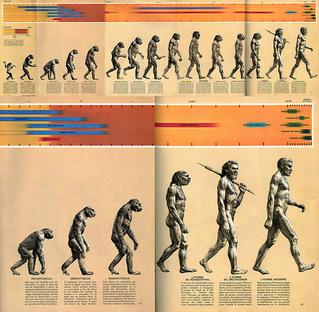 This odd mix of quackery smacks of closed-door racism better suited to StormFront than the New York Times bestseller list. But, as his 2500 Amazon reviews suggest, dangerous ideologies often get a pass when masked in the fluff of popular culture. Despite any superficial gesture to logic and science, gene diets such as GenoType Diet toy with dangerous ideas of racial purity. While DNA testing promises to demonstrate a “universal humanity” of common ancestry, white nationalists have instead employed genetic testing to prove their European pedigree. In practice, then, DNA tests can sustain racial essentialist beliefs and promote what scholars have called the “molecular reinscription of race,” naturalizing an imagined racial hierarchy.

Granted, some food sensitivities do roughly align with ethnic difference, but these may be the result of convergent adaptation by which populations independently evolve similar traits in response to similar environments. For example, lactose intolerance is common among people of Asian and African descent but much rarer in Europeans, presumably because Europeans historically lived in moderate climates that could support dairy herding.  The so-called “thrifty gene” may also contribute to the elevated obesity and diabetes rates on small islands such as Samoa, Nauru, and Tonga, which makes sense given the precariousness of food supply in island ecosystems.

To be fair, D’Adamo insisted that “no one can use this theory to ‘prove’ that any ethnic group is superior to any other!” But D’Adamo’s protest misses the point: by positioning some people as more recent additions to the human race, both his books conjure a eugenicist timeline of human advancement reminiscent of the famous 1965 March of Progress.

What looks like an odd bit of nutritional history looms large when the millions of dieters are taken into account: people who not only read these books and grasp their message, but also use the diet to inform their daily lives.  Even if a dieter never suspects or supports the gene diet’s reliance on charged theories of racial difference, the diet’s message may still resonate, picking up the echos of a culture that too often fails to recognize the source of its own power.  And then the dieter, however unwittingly, enacts the same ugly, persistent drama of racial difference with every bite of protein, carbohydrate, or fat.

Adrienne Rose Bitar is a historian and the author of Diet and the Disease of Civilization, the first cultural analysis of diet books in the United States. She received her PhD from Stanford University in 2016 and is currently a postdoctoral associate in the Department of History at Cornell University, where she teaches Food Studies and is working on a new project on fake meat.