What Should I Eat?: The Influence of a Food Editor

For decades it was the female food editors of newspapers who told local readers what they should eat. Most metropolitan newspapers had women’s sections since the 1880s and they covered continuously covered food. Over the years, food editors took on a more significant role with daily stories. Later, they oversaw full sections of their own with a voice of authority about what people should eat.

These editors held significant power particularly during World War II and the post-war consumer years. They tested recipes and explained new food products. They wrote about war-time rations, food consumer news, and nutrition research. As technology changed how food was prepared and nutrition studies were presented, the food editors explained the changes to their readers.[1] 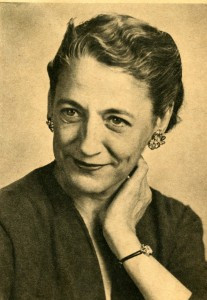 Take food editor Cissy Gregg at the Louisville Courier-Journal, for example. According to her obituary, her food columns were some of the most widely read in the newspaper, based on readership surveys. She answered numerous phone calls and letters regarding food preparation problems, from biscuits that would not rise to cakes that would stick in pans. Her recipes still run on the newspaper’s website today.

Gregg, who held a degree in agriculture and home economics from the University of Kentucky, began a daily food column in 1924. She oversaw the food section at the newspaper with two assistants and a photography department. In 1951, the newspaper set up an experimental kitchen, a dining area and an electronic kitchen bay. Gregg’s next project was preparing a four-color layout for the Sunday magazine, and she would spend an entire day planning and preparing the meal for photographs.[2] She remained the food editor at the newspaper until her retirement in 1963 and she died a few years later.

Gregg encouraged her readers to cook international dishes from allied countries in the 1940s – unusual for the time. This became significant during World War II. Food was an easy way to normalize people who might otherwise seem different or unfamiliar. That societal conversation was made easier by using something that people in all of the nations had in common: food. Gregg had a large collection of world maps that covered her kitchen walls. She said she could cook and analyze the war fronts at the same time. She viewed telling readers what to eat as a patriotic and political act. It was a matter of normalizing political allies.

Later, in peacetime, Gregg recommended the dishes common to her state as a return to a focus on American dishes. She explained that her readers should eat the food of the region: chicken fried in lard, beaten biscuits and jam cake soaked in bourbon. The most requested recipes from her readers were for Kentucky pecan bourbon cake and Margarella – a tuna dish. Recommending regional dishes in a post-war enviornment was a matter of reinforcing the norms the local readers appreciated. The recipes for these comfort foods were passed down within families and shared in the food sections of newspapers. Yet, she also was willing to occasionally reject the unhealthy dishes of the South – noting that the American diet included too much red meat, bread, and potatoes and not enough green vegetables – based on interviews with experts. Her reporting helped readers decide what should be on their plates.

Gregg’s impact went beyond just her newspaper readership. She often traveled through Kentucky lecturing to women’s groups about cooking and what homemakers should feed their families. She regularly shared recipes between readers. In one of her cookbooks, she wrote that she had selected her favorites from a collection of more than 12,000 recipes. She included country captain (a chicken curry dish), stuffed pork chops, and spaghetti rings. The dishes were meant to inspire the home cooks as “cooking the two to three daily meals for the family represents a constant drain on a cook’s imagination.”[3]

Food editors like Gregg also instructed readers about what they should eat – balancing the needs of home cooks with wartime rations and then new technology that was introduced at national conferences the food editors attended. At a time when women were rarely allowed in other parts of newspapers, these editors had a place of authority in telling readers what to eat. The food journalists were the filter for food trends, nutrition studies and regional dishes. Although the food editors have been largely left out of journalism and food history – it was these women who influenced what people ate Gregg and her fellow food editors played a significant role in culinary journalism for decades.

Kimberly Wilmot Voss is an associate professor and program coordinator of Journalism at the University of Central Florida. She is the author of The Food Section (Rowman & Littlefield, 2014), Politicking Politely: Advancing Women in the 1960s and 1970s (Lexington Books, 2017) and Re-Evaluating Women’s Page Journalism in the Post-World War II Era: Celebrating Soft News (Palgrave Macmillan, 2018). She is also the co-author of Mad Men & Working Women (Peter Lang, 2014/2016). Read more from Kimberly on her blog and follow her on Twitter.